BWB Blerd Club – At The Intersection Of Black & Nerdy 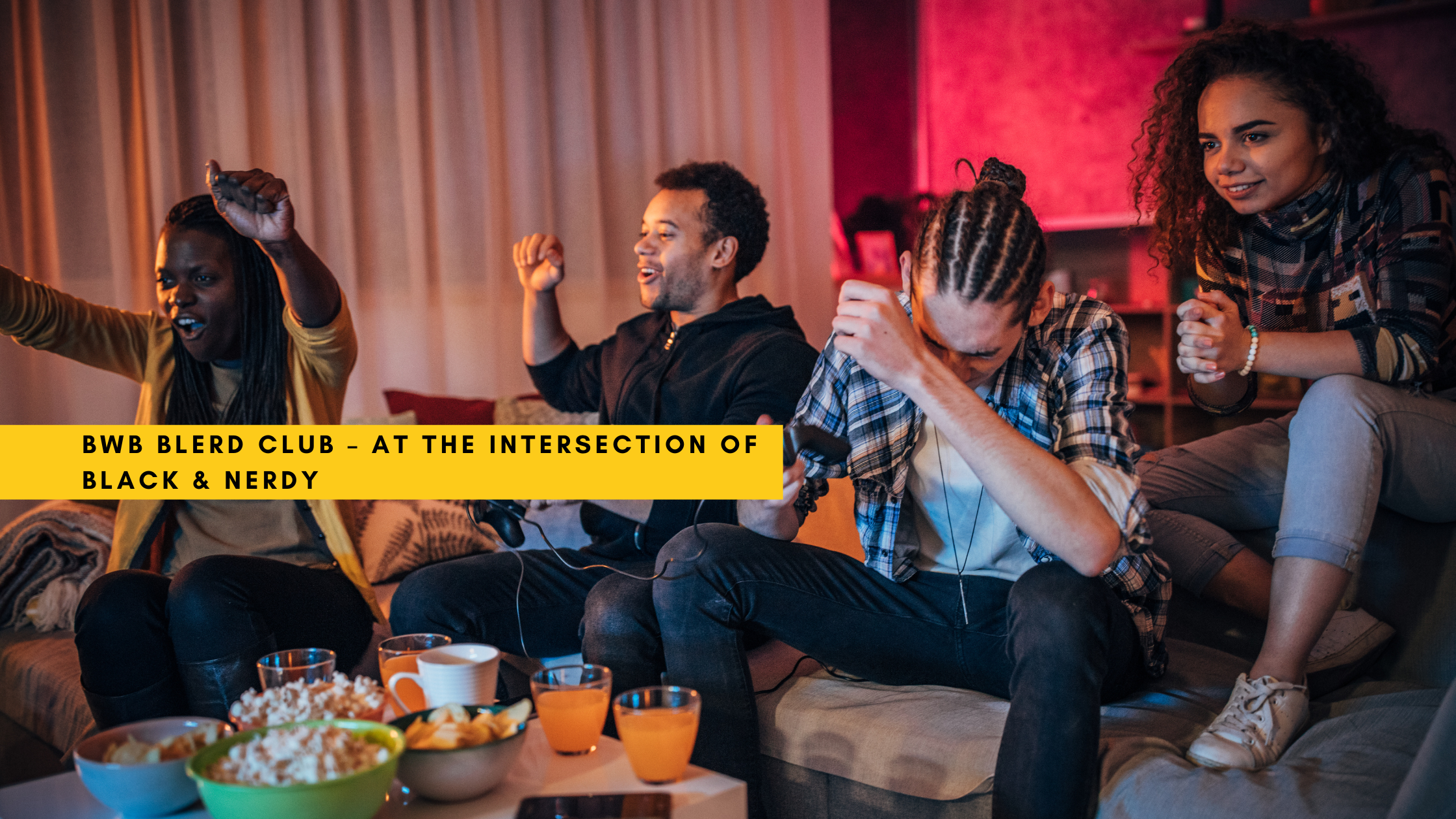 Boston While Black offers a wide variety of clubs and interest groups in which our members participate. From the Parenting Support club to the Blackademics, members are all but guaranteed to find a space that makes them feel seen, safe, and supported on a micro and macro level. We call this member benefit “finding your tribe within the tribe,” and it’s an important part of our philosophy at BWB.

As Black professionals and entrepreneurs in Boston we often find ourselves in environments that don’t give us the room to be our authentic selves. Joining the BWB tribe eliminates the roadblocks to finding or even creating that specific space where you can be your full self, outloud, all the time. For members of the Blerd Club in particular, they have quickly become their own little community within our community – an eclectic group of Black cosplayers, Potter heads, and Star Wars aficionados, just to name a few.

A Tribe Within The Tribe

According to Dictionary.com, a blerd is simply a Black nerd. In the Boston While Black Blerd Club, members connect about their shared interests in a wide variety of topics including anime, manga, and cinematic franchises like Marvel and DC Comics. Since its inception, BWB members new and old have been found regularly bonding over their shared fandoms. Collecting almost 50 members in just a couple of months, it’s easy to see just how needed this particular safe space has bee. One that has allowed its members to enjoy their nerdy interests without any judgment from those who just don’t get it. And for many of them, this is their first experience with people who understand the intersections of being both Black and a nerd.

Nerdom is NOT  “Just for White People!”

Like most pop subcultures in the U.S., the typical nerd communities fail to recognize their own racial biases. Pop culture also embraces the caricature of the socially-inept white guy we grew up watching get bullied on tv, at the expense of the reality. Nerds aren’t one thing, and neither are Black people. Whether the culture creates the stereotypes that we as Black individuals do not partake in things like anime and manga or the stereotypes themselves inspire the toxic culture, Blerds everywhere have been wholly underrepresented.

As with most anti-black rhetoric, this stereotype has even found itself internalized and perpetuated  by lost members of our community who characterize nerdy things as, “for white people.” Boston While Black is a space for all Black Bostonians and Transplants, and thanks to Blerd club leader, PJ Jacobs, an MIT graduate who currently works as an engineer, we now have a space for those at the intersection of Blackness and nerdiness.

A Blerd Is Many Things: Meet the Tribe!

Anime and Cosplay and Blerds… Oh My!

BWB Corporate Member Ginnette Powell, is a newer member of the Blerd Club. She has enjoyed consuming anime and manga for quite some time. When we asked about her experience in the Blerd club so far, Powell shared that she loves “talking about things that most think ”Black folks aren’t into.”

When asked about cosplaying, something another member jokingly deemed required for all Blerd club members, Powell hadn’t yet taken the leap but shared that she has “ideas for costumes” in her head of characters from her favorite shows. She also shared that she watches a variety of anime genres, including both action and slice of life, but also really loves action and sci-fi movies.

Free To Be a Blerd

Jovani Fox is another BWB Member, self-titled Blerd, and lover of anime and manga from Dorchester. She works in government and public admin, and designs jewelry in her spare time. When asked about what brought her to the club, she said, “I originally just stumbled into it. I saw it was offered in groups so, I popped in to see what they were talking about and I was immediately intrigued. I love Marvel movies and Harry Potter so I felt like I fit in with the rest of the members. I also am really just interested in learning new stuff from the community. There’s probably an anime or show I haven’t heard of that might be interesting. I love that it’s a place where [I] can just geek out without judgment, which is true to the whole BWB nature. We’re all free to just BE.”

When asked if she thought there was any overlap with her interest in Marvel movies and Harry Potter with the storytelling in the anime and manga she favors, Fox digressed. “I think there is! I wouldn’t have said that before but particularly now in connection with Marvel’s new Disney+ series Ms. Marvel, it did have a Harry Potter juxtaposition with a concept of time travel.”

Fox is very excited for whatever is to come from her experience as a Blerd club member. “I’m looking forward to getting to connect with new members and finding out what other stuff people are into and how we can all connect.”

The BWB Blerd club welcomes all fellow Black nerds! Whether you are new to the nerd community or you watched Dragon Ball Z when it first came out, this club is for all of us who are proud to be Black and nerdy.

If you are interested in joining BWB and any combination of our clubs, complete your member request form and keep an eye on your email and social inboxes for your activation link during August while membership is open. Find your tribe. Grow your network. Navigate the city. Have fun.