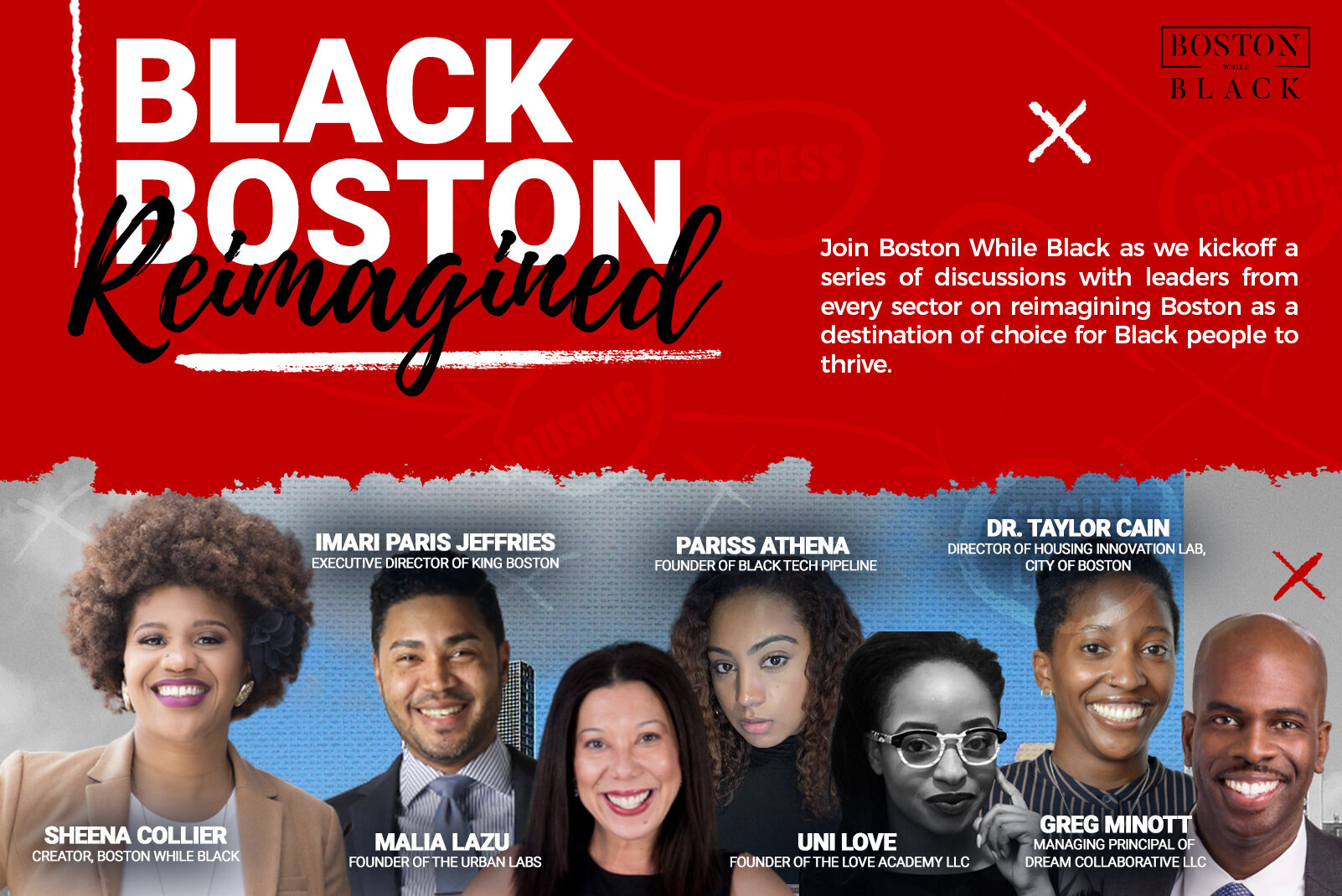 To be Black in Boston is to be met with “joyous connections amidst moments of impenetrability,” Dr. Taylor Cain, Director of the Housing Innovation Lab describes the arduous process of finding Black community in the city. Her experience feels all too familiar to the Black professionals, students, and residents across Boston trying to do the same. Reimaging Boston as a place for Black people to thrive means equitable housing, more economic opportunities, inclusive education, and diverse civic leadership. But will Boston make these investments?

When economic opportunities abound, Black people will plant roots. Indeed many students of color flock to the city every year, as Boston is the 4th largest college town in the U.S., but how many of them stay? For professionals like Gregory Minott, Managing Principal at DREAM Collaborative, moving to Boston presented challenges for finding a diverse network, but he ultimately decided to stay when he saw opportunities to grow his business, and promote inclusion within his own professional community.

While Boston remains a locus for the tech and biopharma industries, there remain many barriers to Black Bostonians who wish to fully participate in the innovation economy. Enter organizations like Black Tech Pipeline, whose mission is to hire and retain more Black technologists in companies around the world. While corporate diversity and inclusion services are everywhere, their founder, Pariss Athena, has a different approach. She virtually coaches new hires for the first 90 days to make sure they have the tools necessary to thrive in their role. Pariss considers her work in Boston more urgent than ever; “We live in a digitally driven era and Black people don’t want to be left behind.That’s so important anywhere, but especially here.”

Outside of work, there are plenty of commercial and cultural spaces that Black Bostonians wish to see themselves represented in. Wally’s, Slade’s and Darryl’s are fixtures in the Black social scene, but broader investments in commercial retail space for Black audiences remains to be seen. Long since excluded from the capital systems that make ownership possible, many point to themed “takeover” nights and fleeting popup events as piecemeal solutions to a systemic problem. “There’s a visible [cultural] vibrancy missing in Boston,” as Boston While Black founder Sheena Collier explains, and it stems from the parochial, citywide policies that limit use of public space. Up until recently, there were only three Black restaurant liquor license-holders in the state, and street performers and artists face excessive permitting challenges to create the lively streetlife common in other urban centers.

Spatial justice, the sense that people bring their culture where they feel safe, is imperative in Boston. As Malia Lazu, founder of The Urban Labs, asserts “it’s not just about what we can do [in a space], but what we are stopped from doing.” Community development actors like Minott understand the strident impacts of spatial injustice, and seek out opportunities to restore public space to Black neighborhoods. Minott characterizes his intention working on the well-known Roxbury Dudley Square (now Nubian Square) design competition in the early 2000s as a chance to help Roxbury residents realize their aspirations through public space. Minott continues, “Black and Brown voices need to be in the conference rooms where these decisions are being made.” Amen to that.

While some schools transition back to in-person learning, Black families looking to supplement their child’s curriculum with fun, educational content that centers the Black experience find themselves at a loss for options. Uni Love, founder of The Love Academy, found the lack of Black representation within the Boston school system emblematic of the city itself. She started The Love Academy as a village of practitioners and educators ready to inspire youth with culturally-relevant programming on African culture, music composition, computer coding, and more. Families enrolled in the Love Academy seek a sense of belonging and high-quality education, as Love explains,“When you log in, it’s so beautiful to see all Black educators. The parents love that!” Truly, a rare experience for many Black students in Boston. But when thinking about the educational system, we must acknowledge the network of nonprofits that operate within Boston, and the influence they wield. Imari Paris-Jeffries, Executive Director at King Boston, captured it well: “We need to interrogate the nonprofits that operate in our communities and programmatize our children, but are not run by folks that look like us.”

More damaging than the beliefs swirling around Boston as inhospitable for Black folks is the erasure of Black cultural and political contributions. Paris-Jeffries is intimately familiar with this lack of recognition of Black leadership, working for an organization dedicated to creating a memorial to honor Dr. Martin Luther King,Jr. and Coretta Scott King. “The Embrace Memorial in Boston Common honors the Kings who met here in college, but also the legacy of Boston civil rights leaders whose work predates the Kings and continues on today.” Memorials, community murals, and intentional public space allows us to celebrate unsung heroes, reimagine different kinds of leaders, and show younger generations what is possible.

So how do we progress critical work in spatial justice, equitable housing, visible Black leadership, and inclusive education amidst persistent beliefs that Boston is hostile towards Black residents? Malia Lazu reflects, “It doesn’t help our cause to be paralyzed by that branding,” noting we must acknowledge Boston’s racist history and chart a course forward. Indeed much work remains across the city to promote a sense of belonging and ownership amongst Black Bostonians. In the meantime, onward.

Boston While Black will continue to examine how we create a Boston where Black people can thrive through our quarterly Black Boston Reimagined event series.